But Father Knew 3 of 4 Children would CLAIM JUST THAT after his death! 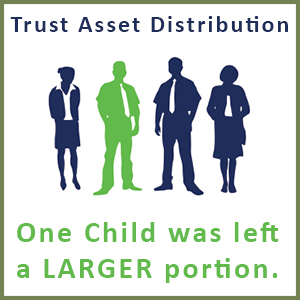 I represented an elderly man with a very large estate which was in a living trust. He had four children and did not want to leave the trust assets equally to his four children for various reasons. He felt that some of his the children were more deserving than others and was aware that the law does not require a person to treat his or her children equally.

Such desires are often disputed and overturned — Trust Attorneys must be extra careful
He hired me to do a trust amendment to leave a larger portion of his estate to one of his children then to the other three. He told me at the time that the other three children most likely would file a trust petition after he died to contest what he was doing. I therefore had to be especially careful to document the fact that he was fully competent and knew what he was doing.

I had him discuss the situation with his CPA and had the CPA write a memorandum to the file to the effect that the client definitely intended to favor the one child over the others. I also wrote a file memorandum to that effect and before I prepared the trust amendment I prepared other documentation that he signed stating that he understood what the percentages of distribution were. He also saw a doctor on a regular basis who was able to determine that he was mentally competent and was available to testify if necessary. I then sent the amendment changing the trust to him several days in advance of the date it was actually signed. I sent it by fax so I could prove that the amendment was thought about in advance and was not simply a last-minute activity which could be questioned.

The client died less than a month after the amendment was signed and sure enough litigation was filed claiming that he was incompetent, did not know what he was doing, and was under undue influence from the child who received a larger portion of the estate. The children who were challenging the trust amendment spent tens of thousands of dollars in legal fees.

However, because of my testimony and the documentation in my file and also because of the documentation and testimony of the client’s CPA, the challengers knew they had no chance at trial so they opted for a settlement. The lesson of this story is that where there are significant assets involved, it makes sense to have any trust amendments professionally and carefully handled so that they cannot be questioned later on. People get into large amounts of trouble when they tried to do trust amendments on their own, especially when they are sick or at the last minute.