How Does the Successor Trustee Handle the Bills and Debts of the Deceased Trustor? 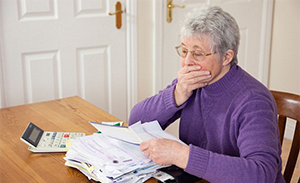 If there is a living trust and all of the deceased person’s assets have been placed into the living trust prior to death, there is no need for a probate court administration. Creditor Rights? For probates, there are specific court-supervised formal steps required to notify creditors and for approval and rejection of creditor’s claims. The situation involving a trust is much less formal and the laws differ somewhat. The person who administers a living trust following the death of the trustors (the persons who created the trust) is known as the successor trustee.

LEGAL LIMITS FOR CREDITORS TO FILE LAWSUITS TO COLLECT

California law has special statutes of limitation dealing with claims against deceased persons. These statutes bar any lawsuit on a liability of a deceased person unless the lawsuit is filed before the first anniversary of the decedent’s death. This one-year legal limit applies to debts which were owned by the trustors of a living trust. Creditors need to act quickly to protect their claims on the one hand and also trustees must be sure to not pay claims that are barred by the one year limit. Because of the one year limit, the trustee cannot safely payout the trust assets to the beneficiaries before the one year expires. As explained below, there is an optional procedure to cut down the claim period from one year to approximately 4 months. TAX EXCEPTION: The one year limit or the optional 4 month claim deadline does not apply to money owing to the Internal Revenue Service for taxes.

Persons or companies who are owed money by the deceased person are known as creditors. Creditors include those with contract claims, tort claims (as an accident claim for example), or otherwise. The California and local government agencies including the franchise tax board are generally subject to the same creditor claims and notification rules. However, taxes owing to the federal government are covered by federal law which allows a longer period to collect.

Unless the optional trust creditors claim procedure is used, the successor trustee is not legally required to notify the creditors of the death of the trustors. This is in sharp contrast to a probate proceeding where the personal representative does need to send out a notice to “all known and reason-ably ascertainable creditors” in the mail.

Even if the optional trust claims procedure is NOT used, the law does require a successor trustee to notice various state agencies. The state agencies one is normally concerned with are the state board of equalization tax claims, franchise tax board tax claims, Department of human resources development claims, Department of mental health claims, Department of Health care services claims, and Medi-Cal claims. If a particular department has its own claim form that must be used. Also, if the deceased trustor received state aid under the Medi-Cal or Medicaid pro-gram, the successor trustee must give notice to the Director or health care services no later than 90 days after the deceased trustor’s death.

FACTORS IN FAVOR OF USING THE OPTIONAL TRUST CLAIMS PROCEDURE

Where there a lot of debts and/or shortage of trust money to pay the debts then use of the procedure may slow the creditors down or get them to write-off smaller claims. If the trust has only one or two beneficiaries who live in California it would be relatively easy for a creditor to pursue property received from the trust. Trustees can deduct the cost of defending claims which is a legal and expense of administration. However, a beneficiary who was sued could not deduct the cost of his or her defense. The time for creditors to sue on claims is cut down from one year to approximately 4 months. This shortened limitation period speeds up the ability of the successor trustee to distribute the trust assets to the beneficiaries. Requiring creditors to file formal claims reduces uncertainty regarding what actual claims exist. Using this procedure prevents the beneficiaries from any potential liability from creditors of the trustors and insulates the successor trustee from claims back against the successor trustee by the beneficiaries for failing to pay valid claims. Using this procedure assures the beneficiaries that all legitimate known debts are handled and paid. If the procedure is not used, creditors could file suit for as long as four years after the due date of the last payment.

A proposed notice to creditors is prepared and filed with the court clerk in the county where the deceased trustors resided. There is no published form for this notice so typically an attorney is retained to make sure the notice is properly prepared in accordance with law. There is a filing fee to be paid at the time of filing which is approximately $485. The court assigns a case number and then the notice is published once a week for four weeks in a newspaper in the town where the deceased trustors resided. Publication fees depend upon the news-paper but can go as high as $700. After the publication a proof of publication is filed with the court and that firmly establishes the beginning of the claims period. Also, the successor trustee mail send notice to “known creditors” but doesn’t have to conduct any search. Contrast the requirement in probate trust claims procedures for the personal representative to notify ”all known and reasonably ascertainable creditors”.

CAN A CREDITOR’S CLAIM BE COMPROMISED?

Whether or not the trustee elects the optional trust claims procedure, the successor trustee can negotiate with the creditors to see if they will accept less money than what they claim. This is often done in an estate where there is not enough money to go around. Surprisingly, a lot of creditors, and credit card companies in particular, are open to having their claims discounted and compromised to eliminate the uncertainty of not getting paid at all. Also, where claims are smaller, many creditors do not want to go to the trouble and expense of filing a lawsuit to reduce the claim to judgment since that can take a year or more.

The debts and taxes of the decedent can throw a monkey wrench in the timing and distribution of the estate. It is therefore paramount for the successor to try to determine right away who the creditors are, what the claims are, and send out appropriate notices.