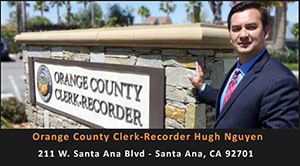 The County records are public and anyone can record a deed or other types of real estate documents. The County does not check to see if people presenting deeds for recording have any legal rights or claims against the property in question. It is up to individuals and lending institutions to determine who actually has the proper legal rights to a property. Thus, before property is bought or sold, a search of the County records is made typically by a title insurance company. This is known as a “title search” to find out who actually has record title ownership according to the County records.

Deeds are typically recorded to provide notification to the general public as to who owns a particular property. Deeds are also recorded to prevent fraud or double sales of the same property. Recording is important especially to the grantee (the buyer) so that the grantor (seller) is prevented from fraudulently transferring the same property to a different person. Under California law, once a property deed is recorded, it is considered notification to all the world of the transfer. For example, if a grantor delivers a deed to grantee #1 today and grantee #1 records the deed today then grantee #1 is safe from the grantor fraudulently giving a deed to somebody else. Thus, if the grantor gives another deed to the same property to grantee #2 tomorrow, that person receiving the deed tomorrow is considered to have legal notice of the recording that was done today by grantee #1 and therefore cannot claim valid ownership of the property. Grantee #1 does not have to prove that the grantee #2 somehow had actual knowledge of the sale or transfer to grantee #1. That is the point of the law that says that the recorded deed has in effect notified the grantee #2 so the grantee #2 cannot possibly claim legal ownership.

MEANING OF THE TERM “QUIET TITLE”

Quiet title is a legal term to describe the court lawsuit proceedings that may be brought to determine conflicting ownership claims to real estate. Thus, in the above example, grantee #1 can bring a quiet title lawsuit against grantee #2 to get a judge to declare that the deed to grantee #2 is invalid. Quiet title lawsuits are also brought to determine other sorts of conflicting claims concerning real estate such as liens, mortgages, adverse possession claims and easements.

Filing a quiet title lawsuit is often the last resort if conflicts in ownership are discovered in the course of a transaction. Sometimes things that are recorded against the property are mistakes and the mistakes can be corrected if everyone involved is willing. Typically there is some investigation and discussion back and forth between the title company, buyers, sellers, and their attorneys to see what the alternatives are. Sometimes there are genuine disputes that need a quiet title lawsuit to resolve. Sometimes there are fraudulent claims which also may need a quiet title lawsuit to resolve. The lawsuit is filed with the Superior Court in the county where the real estate in question is located. The plaintiff is the person who is trying to clear the title to the property into his or her name. The defendants are all persons who have recorded things against the property that the plaintiff believes are invalid. A quiet title lawsuit also names unknown persons as defendants so that all conceivable claims against the property title can be removed and erased from the County records. After the lawsuit is filed, a copy is served on all defendants and the defendants must file responsive papers with the court if they want to contest what the lawsuit claims. If the defendants file responsive papers with the court then the lawsuit is contested and after various legal papers, court hearings, and procedures, there will eventually be a trial to decide the case. Due to our crowded court system, it can take a year or more to get to trial. Meanwhile, the ownership or claims against the property are in doubt and a sale of the property or loan against it may not be able to close.

After a quiet title lawsuit is filed, the plaintiff can record a legal notice of pending action with the County recorder this is also known as a lis pendens. The recording of a notice of pending action creates what is known as a “cloud on the title” which will be picked up by the title insurance company who has searched the title to figure out if it is clear or not. The title insurance company will not provide title insurance until the notice of pendency of action is removed from the County records. The practical effect of this is that the pending sale or the pending loan transaction cannot be completed because of the ownership dispute. In the context of the example above, grantee #1 does not want to complete the purchase because he is not sure if the seller has a legal right to sell to him. The existence of the deed to grantee #2 creates a legal doubt as to who actually owns the property and who has authority to sell it to whom. Ultimately the quiet title lawsuit may need to be completed, which can take a year or more so everything is stalled.

PROCEDURE TO TEST THE VALIDITY OF CLAIMS-MOTION FOR EXPUNGEMENT

There have been a lot of abuses of people filing quiet title lawsuits and notices of pendency of actions to gain leverage in real estate transactions. Sometimes these are filed with little or no validity. However, because people are anxious to get deals closed they sometimes pay settlement money just to get rid of the claim. There is a possible interim solution available through the motion for a expungement allowed by California law. This involves preparing court papers, typically through an attorney, to get a court hearing set within typically 3 to 4 weeks and providing legal reasons to the court to either remove the notice of pendency of action or to require that the defendant’s post a court bond to cover possible damages to the party requesting the expungement. If the expungement order is granted, then the notice of pendency of action is removed from the County records and there is no longer a cloud on the title and the pending transaction can conclude. The grounds for expungement are as follows: the lawsuit doesn’t actually involve title to or possession of real property; or that the claimant has not established by a preponderance of the evidence the probable validity of his or her claims. The filing of a motion for expungement can often serve to eliminate meritless claims and/or force the people making the claims to spend serious money and to present what evidence they have right away so all involved can evaluate the situation. They must produce evidence of the probable validity of their claim at or before the hearing
on the motion to expunge.

Upon the hearing of the motion for expungement, if the judge finds that the claim in the quiet title lawsuit does have probable validity but that the claimant can be protected by a bond, then the notice of pendency of action can be removed and the transaction allowed to go forward. An example would be if a claimant filed a quiet title lawsuit for a lien against the property in the amount of $10,000 but the property was worth $500,000, it would not make sense to hold up a sale for a $10,000 claim. The court could simply require the party disputing the $10,000 claim to post a $10,000 bond so that the lawsuit can proceed to trial but so that the pending real estate transaction can go ahead and close. Also, any person with an interest in the property can ask the court to require the person making claim against the property to post a bond as a condition to maintaining the quiet title action and notice of pendency of action. Thus, the remedy of filing a motion for list pendency and/or the request for an appropriate bond can provide a fairly timely resolution to allow a pending transaction to move forward.

I once filed a quiet title lawsuit to remove a fraudulent deed transferring ownership of my client’s house to a fictitious person. Fortunately I was able to get the judge to rule in my client’s favor and remove the fraudulent deed. Unfortunately, it took a year to get to trial because of all the court procedures involved. My clients owned a house free and clear in Santa Ana which was a good rental property for them. Somehow they found out that an alias person had recorded a deed with the County recorder transferring the property out of their name and into the name of a fictitious person. That fictitious person was then applying to place a $150,000 loan against the property. If that loan would have gone through, the fictitious person would have received the $150,000 cash and my client would have had a $150,000 loan against their property which he ultimately would have had to pay off. I first had to prove that the deed transferring property out of his name was fraudulent. I contacted the state of California register of Notary Public to find out if the notary acknowledgment on the deed in question was valid. It turned out that the notary did exist but that somebody had made a fraudulent notary stamp and had forged the notary’s signature on the deed so that the County recorder believed the deed was valid. My client’s signature on the deed was also forged. I made a search for the fictitious person to the whom the property was transferred and determined that the person didn’t exist. It was a phony name. I worked with the District Attorney’s Office to try and find the person responsible and there were some suspects but that wasn’t enough evidence to prosecute. To get my quiet title lawsuit served on the fictitious defendant, I had to get a court order to publish the lawsuit summons in the newspaper and then after that I was able to set the case for trial because nobody responded to the published summons.

When I got to trial there was actually no opposition and we won the case but by the time I had gone through all of the procedures to get there my client was out thousands of dollars in attorneys fees which he will never recover and his house was tied up in litigation for over a year.

Here is a Fraudulent Deed Filed on a Standard Wolcotts Form 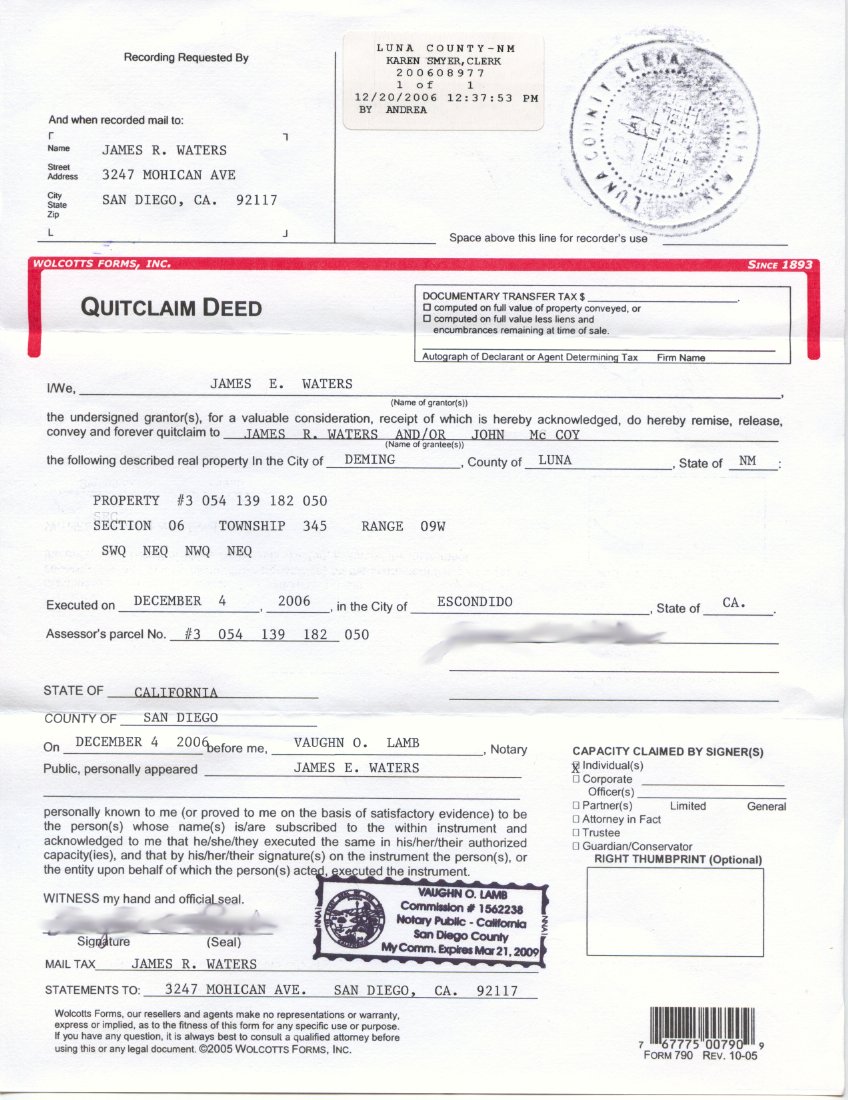 As an aside, I tell clients that having your property free and clear is not necessarily the best thing because you can be a target for a fraud scheme like this and never find out about it. Be sure to check your property tax bill carefully when it arrives to make sure that your name is still on it because if there was a fraudulent transfer there would be somebody else’s name. Also, if you don’t get your property tax bill you should become very concerned and contact the County assessor to find out if somebody has transferred the property out of your name. Whenever there is a property transfer, the County assessor changes the name and address on the property tax bill and sends the bill to the new owner. There are asset protection techniques which can be used to protect the equity in free and clear property which are beyond the scope of this article.