A Will is a written document which states to whom a person’s belongings, money and property are to be given upon death. A Will is typically effective upon a person’s death and can be changed or replaced any time as long as the Will maker is mentally competent.  People who die without wills are said to die “intestate” so their money and property passes under the laws of intestacy.  Refer to my blog on “passing without any will.”

With a will, there are various laws that determine who gets what

The will doesn’t necessarily cover the situation if a child is born after the will is signed or if you forget to name someone alive at the date the will is signed or if you have a child out of wedlock or if you don’t even know the child exists or if a child is posthumously conceived.  Each situation has its own legal rules so the estate planning attorney has to explain this to you and determine how to word your will and/or your trust to carry out your intentions. 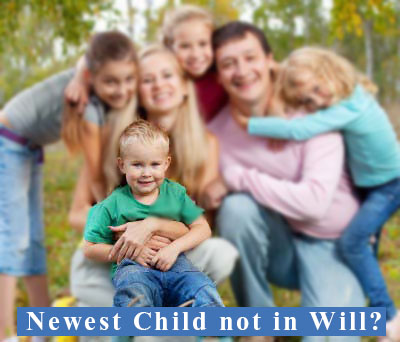 Basically, the law presumes that a child born or adopted after you sign your will will receive a share of the estate as if he were actually named.  Thus, any child born after the will is signed (i.e. omitted children) is included as an heir to the estate.  There are exceptions to that rule which we normally write in to wills we draft.  The major exception is to have the will state that ONLY the persons named are to share in the estate and that all others are intentionally omitted.  This would cut off children born out of wedlock.  Another exception is where there is evidence that the will maker provided for the omitted child by making transfers outside of the estate.  A good example is the gift of property or a bank account with a letter of intent signed by the will maker stating that the gift is in lieu of being included in the Will.

The cleanest way to prevent pretermitted heir problems is to actually name the person you want to cut out of the estate and given them a nominal gift in the will such as $100.   If there is an unequal division of the estate, it is extremely important that the person signing the will which does that is mentally competent and not under any undue influence.

Any child born after the will is signed are automatically included in your estate UNLESS your will states that it excludes later born children.  Thus, you don’t have to amend your will every time someone is born!

Adopted children are automatically included in your estate unless you state otherwise.

Children born out of wedlock

Children born out of wedlock may or may not be entitled to share in your estate, depending upon how your will is written.

The definition of children and grandchildren

The rules are so tricky in this area that all the possibilities need to be considered when preparing wills and trusts.