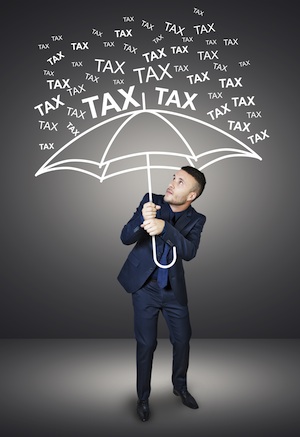 Probate Debts & Taxes – Persons or companies who are owed money by the deceased person are known as creditors. Creditors include those with contract claims, tort claims (as an accident claim for example), or otherwise.  They California and local government agencies including the franchise tax board are generally subject to the same creditor claims and notification rules.  However, taxes owing to the federal government are covered by federal law.

The personal representative is required to notify the creditors so that the time limit for filing their claims with the probate estate starts to run. The initial notification to creditors is the publication of the notice of petition to administer estate in the local newspaper which is done as part of the procedure of filing the probate case with the probate court. The personal representative does need to send out a notice to “all known and reasonably ascertainable creditors” in the mail.  The court published form used for this notification contains a warning to creditors to file their claims within the applicable time limits which are the last to occur of the following dates: four months after the date the personal representative is appointed by the court or 60 days after the date the notice to creditors was mailed. It is incumbent upon the personal representative to notify every conceivable claimant so that these time deadlines begin to run because the estate cannot be closed and distributions cannot be made until these time periods have run.  The special limitations on creditors claims are designed to speed up the administration of a probate estate. Without these certain time periods, creditors would be allowed to file lawsuits far into the future. Typically, a claim on a written agreement or account which is unpaid can be sued on up to four years from the date of payment is due. The creditors claim rules supersede the 4 year limit.

There is a mandatory creditor’s claim form (DE-172) published by the court system which is to be completed by the creditor and sent to the personal representative within the time deadlines. The DE-172 form contains details of the claim and creditors typically attached invoices, account statements, receipts and contracts to back up the claim. The personal representative then sends out a form entitled allowance or rejection of creditors claim which is required to be done in 30 days after the receipt of a creditor’s claim. Claims can be allowed in part or in their entirety. If the claim is rejected, the form has a notice to creditor on rejecting claim which states that the creditor must file a lawsuit to collect the claim within 90 days after the notice. Some claim types may file lawsuits after the 90 days.

Below is the Creditor’s Claim Form DE-172

Creditor notification, claims, negotiations for reduced payments, possibility of future creditor lawsuits create serious motivation for many Personal Representatives will chose to hire a Probate Lawyer to do the entire Probate administration or to assist the Personal Representative when needed for advice and guidance. The probate courts allow you to pay for legal help from the decedent’s estate as a cost of probate administration.

If a creditor who has been properly notified does not file a timely creditors claim with the probate estate is legally barred from collecting on the debt. Sometimes there are disputes as to whether a creditors claim was filed on time, but in any event there is an overall one-year statute of limitations on personal liability claims against the decedent running from the date of the decedent’s death to the filing of any lawsuits or claims.  Also there is a similar one-year statute of limitations for any claims made on oral or written promises with the decedent for the distribution from an estate or trust.

CAN A CREDITOR’S CLAIM BE COMPROMISED?

The personal representative can negotiate with the creditors to see if they will accept less money than what they claim. This is often done in an estate where there is not enough money to go around. Surprisingly, a lot of creditors, and credit card companies in particular, are open to having their claims discounted and compromised to eliminate the uncertainty of not getting paid at all.

Before a probate estate can be closed and approved for distribution, the court will require written confirmation from the various agencies that either they have been paid or in some instances that nothing is owing. The state agencies one is normally concerned with are the state board of equalization tax claims, franchise tax board tax claims, Department of human resources development claims, Department of mental health claims, Department of Health care services claims, and Medi-Cal claims.  If the decedent was on any type of public assistance or was behind in the filing of his or her income taxes then these notifications need to be attended to as quickly as possible to avoid long delays in the closing of the estate.

If the claim is rejected totally or in part, then it is up to the creditor to file a lawsuit in the probate court. The point of a lawsuit would be to get a judgment for whatever the court would allow as a proper debt. There are various procedural rules pertaining
to forms and filing in creditors claim lawsuits.  The attorney for the personal representative in the probate case would be the one to determine what procedures and rules apply. Also, just because the personal representative has allowed a claim, any interested person in the estate may contest the validity of the claim which would lead to litigation.

The debts and taxes of the decedent can be a time bomb waiting to happen and can throw a monkey wrench in the timing and distribution of the estate. It is therefore paramount for the personal representative to try to determine right away who the creditors are, what the claims are, and send out appropriate notices.